A walk through the woods 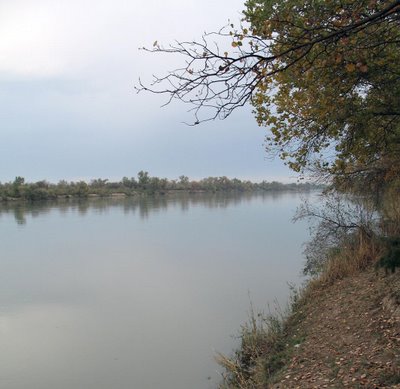 This is the Syrdarya river. In medieval Islamic texts it's called Sayhoun, one of the four rivers of Paradise. It marked the northern boundary of Alexander's conquests, and like its sister river Amudarya (the Oxus), it has a Greek name, the Jaxartes. Both Amudarya and Syrdarya rivers used to end in the Aral Sea. They don't any more. Today they soak away into millions of acres of irrigated farmland; rice; wheat; cotton monoculture. This, of course, is why the Aral sea is nearly gone.

In Andijan province, the Syrdarya describes a lazy meander in the form of a long loop, fringed with poplar forest. We camped there. It's protected forest; you can't hunt in it, nor can you cut wood. It's impressively well-guarded. After a tricky drive through ruts and slick farm tracks, we parked the UAZ jeep in a clearing. A minute later this chap arrived on a black mare. And the mare brought her foal along. See that saddle? It's a folded blanket. 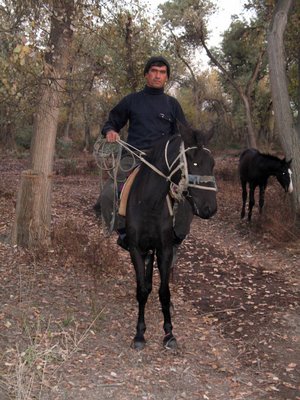 (No, the horses didn't have that white-eyed Lord of the Rings vibe in real life) 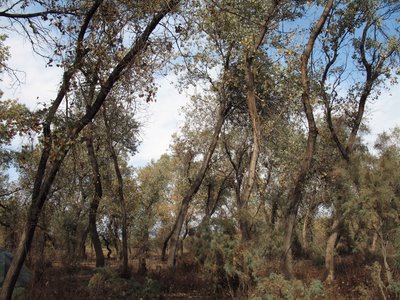 All poplars, with an understory of tamarisk.

And I went for a stroll in hot, blank forest sunlight. It was very still. No birdsong, just the constant pattering of dry, falling leaves. The whole place felt dead, freeze-dried, old.

I crunched over salt-crusted mud and leaf-litter. It pinged with grasshoppers and sinuous little silver lizards. I spent far too long trying to catch one of these buggers, and failed; it was like trying to catch a fly with your fingers.

Next morning I crept from my damp tent (not that damp, Leo, don't worry—thank you for lending it to me) into a forest packed with birds. Soon I'd seen steppe buzzards, sparrowhawks, white-backed woodpeckers, magpies, big grey Siberian chiffchaffs, tiny, flinty Hume's leaf warblers, and black-throated accentors. Absolutely stunning things. I spent an age staring at them. I had no idea what they were. They didn't behave like the accentors I know — dunnocks. Dunnocks crouch and hop about on the ground. These things were picking insects from tamarisk fronds and clambering about in high branches....

Look, doesn't this bit look like an old English hunting forest? I half-expected White Park cattle or a herd of fallow deer to womble into view. 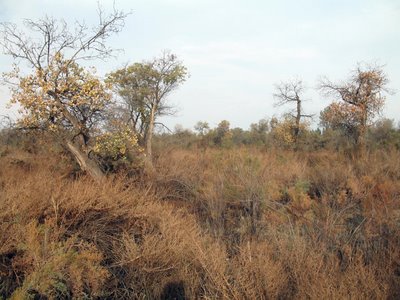 Just near here, I looked up and thought I saw a man standing in a tree. That’s what my brain told me, momentarily. A man in a long overcoat leaning slightly to one side.

And then I saw it wasn’t a man, but a goshawk.

Moments like this are very illuminating. I’d never thought before, much, about the actual phenomenology of human-hawk resemblance, the one that must have brought forth all those mythological hawk-human bonds I've studied for so long.

I looked at a hawk in a tree, but I saw a man. How curious.

This goshawk must have been eighty feet away, so dark against the bright morning sun, so I couldn’t see whether he was facing me or the river. His short head and snaky neck craned: he was looking at me.

I raised my binoculars to my eyes as slowly as I could, half-closing my eyes so my lashes fringed the glare. There. There he was. The glare wasn’t so bad. I could see his edges very clearly. The light was very bright. But I could also faintly see the horizontal barring on his chest feathers. This was an adult male goshawk, and he looked very different from the ones at home. He reminded me of old photographs of goshawks flown by falconers on the northwest frontier. Hell, he was one of these goshawks. He had a dark, dark head with a flaring pale eyebrow, and the bars on his chest were close-set and far from the hazy, broken lines of European birds. Imagine tracing—with a ruler—each horizontal line of a narrow-ruled notebook with a thick, dark-grey felt-tip pen. That’s what his front looked like, through the glare. And he was standing on a bare branch and making up his mind what I was, exactly, and what he should do about it.

Slowly, he unfolded his wings, as if putting on a coat, and then, rather quietly and leisurely, he took to the air, one long leg and loosely-clenched foot trailing as he went. I was astonished by how long-winged he was, and how much he looked like a big — albeit long-tailed — falcon. His shape was very different from the goshawks at home. He was a migrant gos; he'd travelled down mountains and across the plains to winter here.

Happy Pluvialis! I wandered back to camp, had a snooze, compared bird notes, smoked a cigarette and had a cup of coffee. Halimjan made soup for lunch; there it was, bubbling in the cast-iron pot over the gas flame and we were sitting around our red plastic table chewing on stale bread waiting for the soup, and all our heads went up at once. A noise like ripping, tearing hessian, like a European Jay, only with real terror in it, was coming towards us right there and we watched — and slow as syrup and fast as a blink all at once, came the male gos trying his damnest to catch a magpie; they flashed right through the trees in front of the table, and gos nearly had a foot to the magpie before he saw us — five humans and a fire and a truck and a Giant Red Table right below him — ack! — wave off! wave off! — and the magpie dove downwards to the fork of a branch, crouching like a man avoiding a blow, and the gos spooled away through the trees. He looked like a coin falling through water, flashing silver and grey. Some kind of metal. A very fierce one. Potassium, Sodium, Goshawk.

I hadn't wanted to either...

ok, just remembered what I wanted to say:

I admire the park ranger, riding his skinny little mare with a folded up blanket for a saddle. Understand, that is harder than bareback...blankets can slip. I think I might like his job, riding around in that spooky freeze dried forest. Making up stories in my head.

"He looked like a coin falling through water, flashing silver and grey. Some kind of metal. A very fierce one. Potassium, Sodium, Goshawk."

And yes, you SHOULD fly one. I hope to again this year.

This writing is so precise, so authentic, and so vivid. It's by far the finest nature writing I've seen anywhere. One of the qualities that makes it so fine is that it just calls out for the reader to go look, to see...

Old Scrote is still quick on the draw: "Wonderful!"

there's goshawks by my parents place, they snatch the little birds at the birdfeeder, its funny

When I read about tamarisk, I cannot help but give an involuntary shudder, since it is such a huge problem as an invasive species in the American Southwest.

I have to remember that it came from somewhere where, as you say, birds pursue insects through its scaly branches.