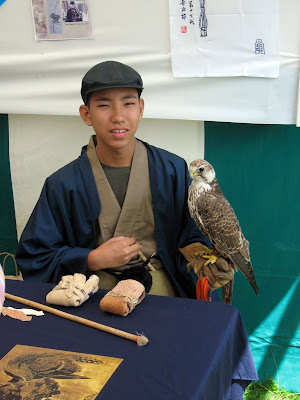 I ought to say that I was in no fit psychological state to go to this Festival, but I went anyway, even if did spend quite a significant (and embarrassing) proportion of my time there curled in a foetal position in the shade under the crown oaks behind the tents. I thought I was going to go with the boy, you see. And of course I didn't. Instead, I made Xtin's life a misery. Sorry, Xtin.

But anyway. It was a crazy hybrid, this Festival, of the Game Fair cut with the 1927 Pageant of Empire at Wembley Stadium, or the Royal Tournament cut with a School United Nations meeting. And of course, the falconry displays were terrible. They always are. You always get some woman—who may or may not be wearing a wimpole—legging it off to the nearest copse, swinging a lure, while the falconer in the arena spins some incredible tale about why today, of all days, the falcon chose to sit in a tree/rake downwind/bugger off entirely.

Oh, there were shed-loads of goshawks, which was rather aggrieving considering my gosless state. A soft-plumaged baby imprint tiercel with stars of down adhering to his wing-coverts sitting on his haunches, draping his wings over the edge of the perch because their new-found feathery heaviness was clearly exhausting. I'd forgotten how expressive goshawk faces are. Faces, not eyes. Gos eyes are baleful, lambent and as remote from emotion or meaning as a metal dish or a patch of sky. But around their eyes, along their lores, hundreds of tiny hair-like feathers flex and raise and furrow exactly as if they were frown lines, and I rememebered my friend Erin telling me how the Naxi falconers he met in China didn’t weigh their hawks to assess their readiness to hunt, but simply looked at the expression on their faces.

There was also one magnificent, huge, powdery imprint Finnish female gos who sat like a bloody god of leopards on one falconer’s fist. She might have been the most beautiful thing I have ever seen. Any coincidence of ease, beauty and ferocity is a bit of a gimme, I know, but her owl-like head and her sleek front feathers with their teardrop slashes all covered in a plummy bloom held me absolutely spellbound. I wanted to look at her all day. She just wanted to look. At everything.

Other sights! A little Arabian fort made of lath and plaster, with a crenellated top and a flag. A little bit of desert, fringed with cut reeds. A climbing cliff next to the DEFRA stand ( to teach dodgy falconers how to climb to peregrine nests? The mind boggles). Camels munching hay. Muscly black and cream Arabian salukis and feathery gold english ones with graceful necks in wide leather collars. There were campfires and carpets, and Turkmen falconers in vast Turkmen wool hats, and Japanese falconers, and painted screens, and borzois, and Emiratee falconers pouring bedouin coffee for slightly baffled festival-goers. It was insanely strange.

Of course, partly that was because I was kind of insane, that day. Lots of things happened that made very little sense, either on their own, or in concert. The car that drew up next to mine, amongst the thousands of cars in the grassy carpark, was that of my old friend John, whom I worked with many years ago when he was researching geese and falcons in the high arctic. I guess the passive smoking of a vast amount of incredibly strong skunk as we sat downwind chatting to another old falconry friend, didn’t help with the weirdness. Slightly spaced, and certainly half-mad, I met with old colleagues and friends; impossibly important Arab VIPs, retired officers from Pakistan, ex-pat vets, old-school falconers, bookmen: indeed, the whole gamut, from royalty to gangsters. I love falconry.

The worst moment of the fair, though? Indubitably the golden eagle. A tiercel, but still with killing talons the size and thickness of your index finger, sitting on a bow-perch. He was very chilled. His plumy hackles blew in the wind as he loafed, cocking an eye up to the thermally sky to watch kites, swallows and hobbies passing through, far above. He was surrounded by people, and even I was impressed by how utterly unconcerned he was. A photographer kneeled three feet from his broad mailed chest, pushing a macro lens into his face. About five inches from his face. Wow, I thought. That’s probably not that advisable, because the eagle’s leash gives it, oh, a good five feet leeway. I have been grabbed by an eagle. When you are grabbed by an eagle – mine was by the shoulder – you actually cannot do anything. You become entirely helpless. Not only because an eagle is stronger than you, but because shock cuts in almost instantly. You understand, these birds kill wolves. Read that again. They really do. And deer.

So as I watched this photographer, I was faintly nervous. Another camera appeared, and got even closer. The eagle looked a teeny bit less relaxed. And then, with a shock as if I'd put my hand into a plug socket while jumping waist-deep into an icy pool, I watched a tiny, fair-haired, not-very-good-at-walking eighteen-month old child walk unsteadily between the eagle and the photographer, brushing the front of the eagle as it did so. The eagle started in surprise, and leaned its snaky head forward, hackles risen, to clop at the child. It didn’t mean to touch the child, and it didn’t, but it was a mite hacked off. And I felt sick and dizzy. If the eagle had done what it might have done—grabbed the child—which would to it have been as rapid and as easy as someone putting out a hand to pick up a cup of tea, the child would have been dead in seconds. No-one seemed to notice, or see what had happened. For god’s sake, what is wrong with people? No-one would let a tiny toddler walk in front of a leopard, or a lion? Or would they? When I was in South Africa, many years ago, I visited a game farm where they bred King cheetahs. Which paced the fences, watching the crowds. You’d see families with small kids walking along, and a cheetah pacing elegantly along, just the other side of the chainlink, in step with the smallest and weakest child, eyes fixed, locked on them. “Look, Thomas!” I heard one woman say in delight. “The cheetah likes you best.” Christ. 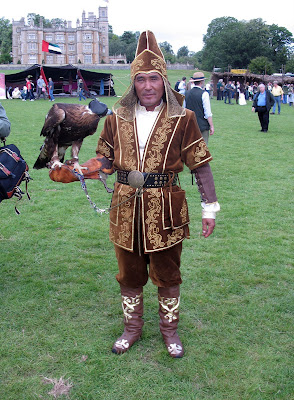 Posted by Pluvialis at 3:02 PM

When I saw your pictures on Flickr yesterday I thought you might come back on line soon. I'm glad you have.

I don't know much about eagles...but I don't think I'd let a small soft child near one!

People generally don't think much. At all.

This sounds like a very cool festival though! Like being in an alternate universe for a day.

(Come over and see my bird's nest pictures! Maybe you'll know who used to live in it.)

I love that guy's boots.

Aha. Puzzle resolved: walked past someone at festival - virally-fevered brain very belatedly registering Pluvialis-like cues - turned round ... but no one there was even trying to look like you - dismissed you as a hallucination. Glad you weren't!

Sad to have missed you, indioglyph. I would have been no fun to talk to, though, honestly....

Heidi, I don't know about your nest. Nests are my ornithological blindspot! It's very beautiful though. And those boots were made for hawking (etc etc)

Roger that. I'll think up something really ... pointed.

Once I worked in a zoo. A tapir broke loose among the Sunday crowds, and a woman who had been whining to let her kid play with the (quite dangerous) chimps took the opportunity to thrust her kid into the chimp's bars, where he was bitten. She then proceeded to sue the zoo.

On a cheerier note, that splendidly costumed fellow is Muhammad, who owns my dogs uncle, and whom I may see in September(more news coming). I too love falconry.

Glad to see you back.