This is inspiredradio. The BBC World Service's Rajan Datar decided to ask Colonel John Blashford-Snell what he thought of Indiana Jones and the Kingdom of the Crystal Skull.

In case you had forgotten, here is Indy: 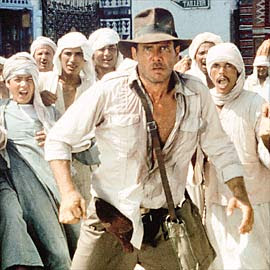 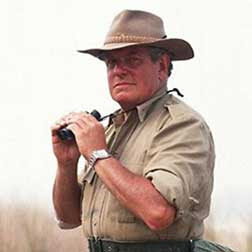 Anyway, I loved the interview so much, I had to transcribe it. They may remove the link, but for now, you can listen to it here.

To gauge whether, as some critics suggest, both Indy and Harrison are far too old to be tearing around pre-Mayan cities and Amazonian waterfalls, we thought rather than getting a film critic, we’d get the views of a real-life professional explorer. Colonel John Blashford-Snell is famous for many of his pioneering expeditions, like leading a team down the Blue Nile at the request of Emperor Haile Selassie in 1968, and navigating the entire course of the Congo in 1974. Today John is still active, and setting up future projects.

I asked him first if he actually enjoyed Indiana Jones and the Kingdom of the Crystal Skull.

Yes. It’s a fantastic sort of fantasy; it’s action-packed; it’s an adult fairy story. It’s a blend of … E.T. and science fiction and more modern sort of Cold War scenes, and the good old battle of Good versus Evil, of course, that comes into it. Once or twice it was a little difficult to follow the scenes because they move so fast—and a little bit short on jokes—but maybe that’s because it’s so fast-moving and there’s not a sort of boring second in it. And the stunts are absolutely amazing. I was much reminded of some of our own scientific exploration society quests that we’ve done in South America over the last few years.

We’ll come to that in a second. Some people have talked about the brand, the Indiana Jones brand, as being perhaps a little bit old and dated, and that goes for Harrison Ford too, I mean, has his ‘permascowl’ if you like, become a little bit wearing? Do you however, still exploring, still going on these big adventures—do you think he’s cracking the whip for Grey Power?

Oh definitely. I mean, a man at 64, 65, who can perform as he did was quite remarkable, I mean, his physical fitness and agility are quite something: outstanding.

In any way, do you have assignments that are as hairy, in a sense, as some of the scenes that you see in films like the Crystal Skull?

Well, yes, er, I mean, some of the, on the—a few years ago we did an expedition in Bolivia and, ah, Brazil; and that was actually looking for a lost city. It was Paititi in this case, the great city of gold. But Akator came into it, because we found—

—which is in the present film—the current film—

—yes, it’s in the present film–and I thought: golly, where did they get this story from? They must have read our book. One of the things about it was that we were faced with a bunch of neo-Nazis. They were real. And we were followed about by chaps with red armbands with swastikas on and that sort of thing. And this was in 2001. And so they created a lot of difficulties for us. And luckily the Bolivians equipped us with a wonderful Bolivian colonel, Hugo Cornejo, who was, um, built like Rambo, and his nickname was Rambo, and he dealt with the opposition..very effectively.

Well this is amazing because you’d think that films like this are in the realms of fantasy and bear no relation to real life. But what you’re suggesting is that actually real life can be like that…

Oh yes—I mean there were lots of scenes in it. The red ants. I remember being attacked by red ants. They weren’t as big as the ones in the film, but by God they can sting. I know, I was going to a dance a few weeks later after I’d been bitten and I was still scratching; and the girl I was dancing with said, ‘are you alright? Are you fit? Have you got a nasty disease?’ wondering why I was still scratching…

Did she hang around with you to the end of the evening?

No….she didn’t; she thought she might catch something from me.

But the snake was my only criticism. Because when he’s hauled out of the swamp by somebody throwing a snake … it was too rubbery and too long to be an anaconda. And if it was a real anaconda, two or three people wouldn’t be able to hold it, I can tell you; I’ve tried, and they are enormously strong. That was the only fault I would say, on the stunts.

I want to ask you about the authenticity of the archaeological references, you know; they talk about Mayan history; language and culture; hieroglyphics; and the geological references as well, to crystal and gold. I mean, how close are they to reality?

Well they have found crystal skulls; there’s a very famous one, which is Mayan, and the Mayan and Tiwanaku and Inca civilisations are still being uncovered to this day. I was involved in an expedition last year where we were actually looking for a meteorite that had crashed into the jungles of the Amazon. It wasn’t difficult to find, because it made a hole five miles across. And when we were digging, we kept coming across pottery. And we realised that this was pottery that had been from an earlier civilisation that had probably been wiped out by the meteorite, and I’m going back again next year to do another one like that. So there are a lot of references to archaeology which came though.

Now it does strike me that action films like this, ‘boy’s own’ action films, you it can either buy into it, and love it, or it can leave you cold. Can you accept that, can you see that there are two ways of looking at this film?

Yes, there are. I thought they were very clever in bringing in Shia LaBeouf, the young man, the mixture of the Hell’s Angel-cum-punk rocker; because obviously that brought in the younger generation, and made it more plausible. I felt rather sorry that they didn’t provide him with a sort of Incan Princess, because he didn’t seem to have a love life. And I think he provided a sort of degree of reality to balance all the old ones who were there; I’m sure the older generation like me loved seeing them all coming back.

Now, one very important character in the film is the hat, which is symbolic in many ways, and I know that you have actually designed a hat for explorers. Are hats that important?

Yes! Very much! I mean I designed one….It’s not quite the same as Harrison Ford’s hat, but: it was a small, folding hat, that contains a mosquito net that can be rolled down your neck to keep all the bugs and beetles off; it’s got a gore-tex material to keep out the water; and it has a brim that is filled with a chemical that which, when it gets wet from your sweat, goes cool. It cools your fevered brow. And it can pack up and go in your pocket. And I use it all the time. I used to use a pith helmet in the old days, but the trouble was I found so many South Americans were wearing pith helmets that occasionally, when I was saying to an aircraft doing parachute drops, “Drop it to me! I’m wearing a pith helmet!” they’d drop it to the wrong chap, because there was someone else wearing a pith helmet…

Which scene or moment in the film was for you the most gripping?

Oh I think the chase through the jungle along the cliff and then over the waterfalls with the Soviet amphibious jeep. That hasn’t quite happened to me, but I have had adventures on cliffs in South America, and I have lowered boats—not cars—boats over waterfalls in the Blue Nile. But I think that whole sequence, you gritted your teeth throughout and you didn’t quite know what was going to happen—the sword fencing, the great bulldozer crashing into the vehicle, the RPG7 fired by Harrison Ford—he seems to be a very talented chap—he’s a crack shot with everything he picked up! Whether it’s his whip or his pistol!

The notion of defying death so often — was that for you constantly credible?

Well it gave me ideas, I suppose, for the future. Um, yes, I suppose, when you … things don’t go wrong, at, um, on an expedition, with quite the same rate. But they can go wrong very suddenly, and very quickly, and you need to react fast. Um, mentally fast, anyway. And of course nowadays we have the use of modern technology—satellite phones and all sorts of things to help you. But over the years films like that have inspired me, because it does actually — when you’re in the middle of the…you’re “Oooh! I remember Harrison Ford did this. We can do something like that” So let’s face it, it was good clean fun, and it was fantasy of course, but it’s entertainment in the classic Hollywood style.
Posted by Pluvialis at 6:34 PM

My favorite comment on the film is this one from archaeologist Kristin Romey:

"OK, the scene where Indy tore into a mummy with his bare hands raised an eyebrow, but I almost fell out of my seat when he turned to his sidekick Mutt and asked to borrow a knife. Not even completely incompetent archaeologists go anywhere without a multi-purpose knife and a pen and paper (and maybe even a measuring tape) to at least make a basic record of what they find. It got even worse in a later scene when the archaeologist had to borrow a freakin' pencil. What's Indy carrying in his shoulder bag -- a change of undies and some trail mix?"

For some reason, I'm starting to *love* films that show old guys still able to do exciting stuff...

perhaps you will credit my image of John Blashford-Snell?

The image is copyright, but may be used with an acknowledgement.

thanks for the transcription of the interview, I missed it a couple of years ago and I was looking for some audio file. An you are right about the comparison between Indiana Jones and Blashford-Snell haha

This is an awesome review!